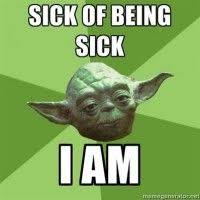 It’s been almost 3 weeks ago since I called in sick.  My bowels still feel like they’re tied up in a bunch. I feel nauseous all day long and every muscle of my body hurts. My head feels like it’s not part of this world. Sleeping is impossible. Not just because I have a bad sleeping pattern since the dawn of mankind, but also because of this annoying coughing that get worse whenever I lay down.

Normally I would just wait it out for a few more days. But work has been calling me several times to check whether I’m really sick, supposedly claiming they are worried. Apparently it is not normal to have the flu for more than a week. They insisted that I would make an appointment with the doctor.

Most Dutch doctors will the advice to pop a Paracetamol every hour, drink enough water and use some expensive branded coughing syrup. Visiting a doctor  in my country basically feels like a waste of time. 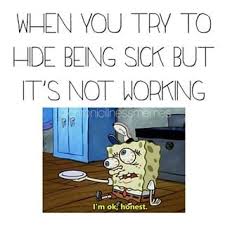 Yesterday, a few friends from church were so nice to came over to check up on me. When I answered the door they hardly recognized me. Apparently I look just as fabulous as the sick Spongebob displayed in the image on the right… My friends also insisted a few times that I’d better visit a doctor.

And thus, I actually did just that earlier today. To my surprise, the doctor prescribed me some extra drugs that will supposedly help me sleep and breathe better. She furthermore informed me the obvious; that having the flu for almost 3 weeks is unfortunate not uncommon. The doctor advised me to maybe run a blood test, to make sure what kind of flu virus it is if I don’t feel any better by the end of this week. I suppose not all doctors here in my country are as bad as I thought…

Well… The room is spinning again… I better go.

Here’s a nice song that I found suited for this situation. I really have nothing else to say at the moment. Fudge it all. Fudge you and your fudging friends. Fudge it.