It’s such lovely weather out, lucky me I have a day off! Hooray! What tops off this wonderful day even more, is recovering from the flu and having a cold. Sneezing  and coughing like a drowning dog while it’s so hot and sunny outside is just hysterical. But that’s not all I have to resort to, to entertain myself on this lazy day filled with sunshine.

Earlier this week I ordered a few essentials that are supposed to be delivered today. I received an email from both companies that my packages are on their way and should arrive today.

Thankfully it is my day off, so I have no where to go and have plenty of time wasting I mean waiting on the mailman. Thankfully I have a backyard so I can enjoy the sunshine while waiting.

It’s probably foolish but I do hope it won’t take all day for the packages to be delivered. It is always a surprise when the actual delivery will take place, isn’t it? Despite the fact that they promise it’ll between let’s say 8.30 to 12.30.

Even when a company claims they want things delivered at your place about a certain time, it’s all depending on the delivery guy whether that will actually occur.

Sure, there is the option to have your stuff delivered at your neighbors. The neighbors that usually rarely leave home are retired and or home bound because of physical problems, at least in my block that’s mainly the case. Call me weird but I rather not have the old man down the block receive my brand new bra for me. Sure, the bra is wrapped in a package but the thought of my new bra being in the hands of that old guy just doesn’t feel right…. And so I rather wait for it myself. Even if it takes all day.

Some delivery guys are good, polite and caring hardworking folks. Some are not such jolly good fellas that nobody can’t deny. Some are plain out rude, never deliver on time or dump the paper in the alley nearby.

Some even deliver at times when the vampires normally come out at night. It was a scare at first, hearing someone rumble in your mailbox when the moon is hanging high in the sky. It’s something I’ve gotten used to by now, though.

Here in my part of town, the paperboy runs his route in the middle of the night. Even though that I have tried to cancel for the crappy newspaper since forever, this “paperboy” is persistently chucking the spam into my mailbox.

Lucky for them, I happen to be a night owl. One night when I was out having a smoke I had the pleasure of seeing this strange “paperboy“ walk their route. Suddenly, it all made sense to me.

Apparently this paperboy is actually an older couple. Too embarrassed to walk their route in the middle of the day, they deliver the paper at night, hoping to avoid any contact with people while doing so. 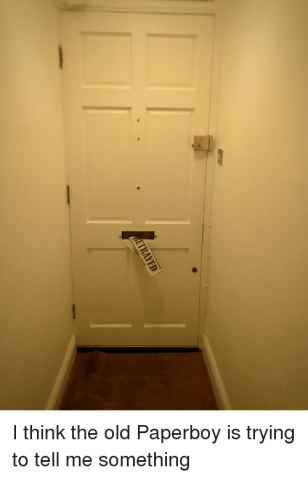 Needles to say: The paperboy couple were more than   *cough* grumpy old bastards they were *cough* to see me standing next to my own door with my cigarette in one hand.

They were even more thrilled when I said “Thanks for the evening paper” once they turned around and left. *cough* you should’ve seen their faces, so angry  *cough*

After that one specific encounter, this elderly couple refuses to pass my door in the middle of the night to dump their glorious spam.

It’s been weeks since I’ve heard rumbling at the door in the middle of the night, followed by the sound of a package dropping onto my doormat. Most of that paper is filled with adds and crappy articles that nobody gives a flying donkey dung for.

Is it bad that I hope I’ve scared these grumpy old people off for good?

Seriously; why are there so many old grumpy mailmen out there? I understand it can be quite a stressful job; To run around with a bike or car stacked with packages while having to do this in a certain time frame. And maybe the salary isn’t that great. But dude, it’s the job you choose to do. Even if it’s because you can’t do any other job, because of whatever given reason; somehow you ended up delivering mail and packages for a living so you choose to keep on doing this to make a living. And If you don’t like it, don’t blame it on the customer! 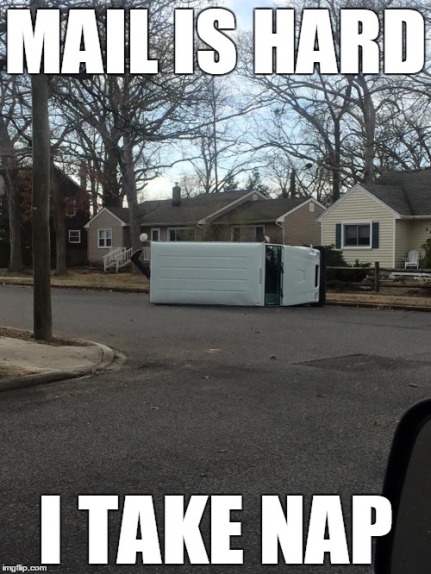 What some delivery guys tend to “enjoy” a lot, are delivering to appartement complexes. This one time I  had ordered to be delivered at my baby brother’s appartement. It was supposed to be a surprise for him.

The moment my brother opened the door for the delivery guy, the delivery guy started yelling and cussing at him for no given reason and left without giving the package to my brother. So much for a fun surprise, right?

I was quite pissed off when my brother told me all about it. I called the company about it and filed in a complaint about the delivery guy.  It turned out that the mailman had give the package to a neighbor in the same appartement complex, who lives on the ground floor. The company sent my brother an apology with a box of sweets.

Later I heard from more people who live in an appartement complex that they have experienced similar things with the mailman. This guy doesn’t want to go up and hand the package over to the customer, despite the fact that there is an elevator in the building and some of the people who live in the building need a wheelchair to get around. Neither will he wait for the customer to come down to pick up the package. Sometimes, he would just leave the package hanging on the doorknob or somewhere near the appartement complex.

Seriously, what the fudge-poodle is up with that?

While I’m stuck waiting here at the house for the mailman to deliver my stuff, I guess I better sit outside for a while and enjoy the sun.

Wait, is that the doorbell I hear?

Just one more package to go. Hoping it won’t take too long. But you never know.

That’ll be all for now. I’ve rambled enough in this poor excuse of a blog for the time being. Have a good one. If you like to read more of my incoherent load of bla-dee-bla. Thank you for lurking. Do feel free to lurk around some more. Use the comment section to cuss me out because just I love that and God speed.