Hello dear lurking lurkers, how have you been? I’m alright. I just need to vent, that’s all. I need to vent about having a crush. For it is the most annoying feeling in the world.

It’s the story of my life, really. To want what I cannot have. I guess I just love to torment myself by craving for things that I simply shant and can’t touch.

What disturbs me the most about these crushes is that they just don’t seem to rub off after all. They never completely fade away. Oh no! They linger on and on for years, like a chronic illness.

There’s this ongoing tormenting crush I have on Linkin Park’s rapper. What’s not to love about the guy? He’s multi-talented, funny, intelligent and very nice on the eyes. Those who have seen my Tumblr-account could only agree that it’s quite a sad obsession.  Delusional? Nah man! I am fully aware of how unrealistic the crush is.

Still; Having a crush is horribly annoying. Especially the kind of crushes that just linger on and on and on. Oh my God, why do we have to have feelings and emotions? Just why? Feelings are annoying. Sometimes I wish I were emotionally dead. It would make life a whole lot easier. But then.. How’d that old saying go? Though, if you asked some people, I do come across as a bit of a sociopath sometimes. Which I find odd. Just because I prefer not to cry in public and laugh at certain things that others might consider sad or horrible, doesn’t make me a hard hearted sociopath, does it?

So the good thing about a celebrity crush: It is harmless. But a crush on someone you actually meet every now and then, that’s just tricky. Especially, since I have the social skills of a spazzmic socially awkward penguin.

There’s this guy I’ve known since I was a kid whom I had a mayor crush on. Just looking at him made me weak in the knees. Whenever he’d speak to me, the butterflies in my stomach would go bananas. But I never had the guts to tell him what I felt, because he was a little older than I, and he was already seeing someone. A few years later, he got married to that person and is still married to her to date. Married with children, even. They have lovely kids, really.

His wife acts as if she had a broom stuck in her ass, though. And I’m not saying that out of jealousy. She is obnoxious and stuck-up and can only be nice to you when you have something to offer. But some guys just like their women bitchy and uptight. In the end we all have our silly fetishes, I guess. 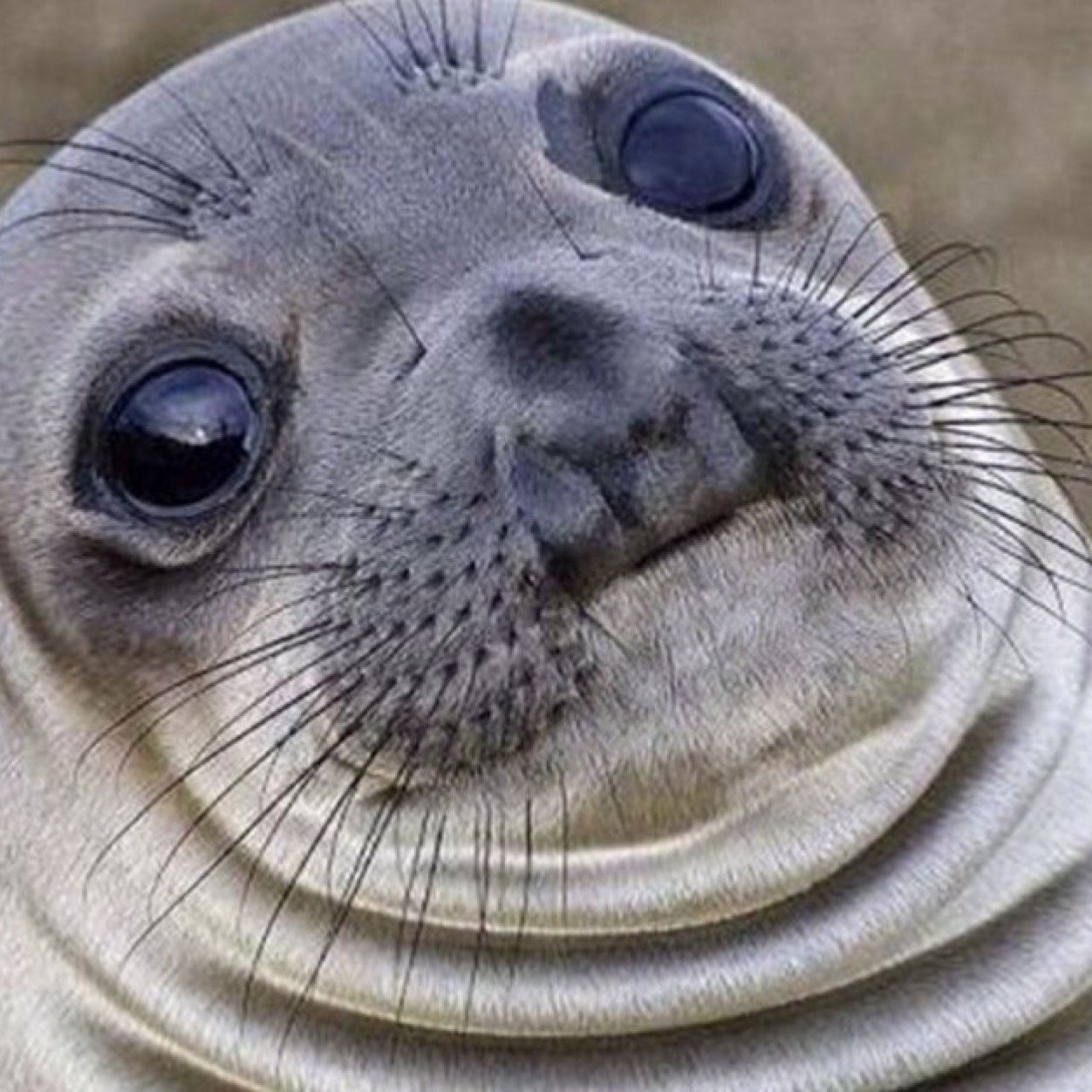 But to this day, there’s this weird vibe about us whenever we do meet every now and then during social events. He always greets me with the warmest smile and says things like “It’s always nice to see you”, and “Life’s always good after catching up with you”. I know he’s just saying that to be nice. But whenever he says stuff like that it still makes the butterflies in my stomach go bananas, while on the outside I just try to keep my cool. And I’ve always assumed I kept my cool just well enough. But maybe I’m mistaken. Maybe I look like the seal on the right during those moments, which could give it away that I’m either not-right-in-the-head or have a childish crush. Maybe he knows.

For some reason, his wife somehow never really seemed to like me. Not when we were kids and now that we are older she greets me out of politeness, but whenever I say hi to her husband I can just feel her resentment towards me. It’s not like I would ever touch her man. I never dared to when we were teenagers and I certainly don’t dare to now. And to be honest, when I discovered he allows himself to be treated like a doormat, that was quite the turn off for me.

But now I think I’ve gotten myself into yet another terrifying situation. Since quite recently, a new set of butterflies are flying in my stomach. I don’t want them there, but they are.

There’s this one guy, who I happen to know for quite a few years now. We hang out with a group of friends. We’ve hardly ever hang out with just the two of us. There’s always another friend around. The short moments whenever we do sit just with the two of us, there’s this weird and awkward chemistry going on. But maybe it’s just me, seeing things that aren’t there. It’s not like I want to see anything there. Really, I don’t. But for some reason I do.

I have the urge to be a total bitch towards him, but I try my best not to. A guy who brings up feelings like that isn’t normal. There must be something wrong with him. Surely it is not I.

Other than that, he’s a nice guy with a good sense of humor. But that’s it. Nothing special.

What creeps me out the most, is that he is starting to appear in my dreams. Vivid yet pleasantly innocent dreams, that feel as real as the burning in my eyes after spending several hours staring at my laptop screen in the dark. I’ve shrugged it off, telling myself it’s ridiculous to feel these stupid feelings and that they are probably there simply because I’ve passed the 3.0 and my hormones are playing tricks on me. I’ve shrugged it off, because he clearly is not my type nor will he ever be and I’m sure I am not his type either. I shrug it off and keep my distance for a while, hoping that the next time I see him I won’t feel a thing.

But the moment he sends a text, my heart skips a beat and those wretched sickening butterflies are going bananas again. I find myself fighting the urge to ask him whether he’s home and if he’d enjoy a cup o’ tea with lil’ ol spazzmic me. I find myself going completely nuts on the inside, thanking God that I’m not around anyone who will notice.

I’m afraid that I’ve been developing a realistic crush…. A terrifying crush. But what am I so scared of? It’s not like I would have to let him know, or anyone else except for the few lurking eyes who pry this miserable excuse of a blog. Maybe I should just avoid him for a little while longer. Just until I learn to keep my cool, until it’s gone.

I just don’t know what to do with myself. *sigh* Having a crush is just too silly, terrifying and God-awful for words. What I need is a nice big glass of wine and some Mr. Tumnus time.