So last Thursday it was Halloween. Our local movie theatre had a special Halloween evening planned: two scary movies, a snack and a funky drink for an interesting price. I of course checked reviews and trailers on the internet about both movies before making the decision to actually go and see the both of them. And the trailers of both movies seemed quite entertaining.

The first movie we got to see was Insidious 2. Even though I haven’t seen Insidious 1, I must say that the sequel was quite watchable. For a supposed horror movie it did have the proper ingredients: A few big old scary buildings with a spooky mysterious history, a strange entity haunting the house, a mother who shits bricks the entire time, a kid with paranormal powers and the father appears to be posessed. And then there’s these ghost hunters who want to resolve the mystery around the spooky house and help the family with their ghost problems. All together, Insidious 2 promises to be quite the thrill.

Despite of all the spooky elements, Insidious 2 isn’t that scary. It does have a few moments that keep you on the edge of your seat. My sibling and I just couldn’t help but crack up during a few scenes, though. I won’t give any spoilers. Let’s just say that there’s just something about ghosts and closets that made my sibling and I piss our pants from laughter. And there are more funny moments during the entire movie.

All in all, Insidious 2 was alright. Decent. The second chapter actually made me curious to see the first chapter. I’m definately going to download it. 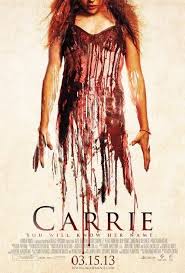 Then the second movie we got to see during the Halloween Special of our local movie theatre: Carrie. It is the third film adaptation of Stephen King’s 1974 novel of the same name. And so with that knowledge, and the trailers that I saw for this movie, I was expecting something decent. I’m sorry for the spoilers that will follow now. I just need to express how much this movie sucks….

The story starts with a woman screaming out in pain in a bed in an empty house. She thinks she is suffering from cancer. The woman also seems psychotic, auto-mutilating herself throughout the entire movie because of an unhealthy fear of God’s wrath upon her. Once the woman discovers that she is actually in child labor and not suffering from cancer, her first reaction is the desire to kill her freshly born infant. But decides not to. Sounds like a nice start for a scary movie, right? Well… It all goes down hill from there…. After 92 long and dreadful minutes I can only state that Carrie 2013 is a BORING AS FRACK!

It’s the typical teenaged drama. Young girl with a single psychotic parent gets her period for the first time during gym class. Carrie thinks she’s dying, clearly having the same psychotic tendencies as her mom. The other girls laugh at her for it. And it’s almost prom night, everyone has a date except for poor little Carrie. Boohoo…  A teacher feels sorry for Carrie, and a bunch of other kids do too. The teacher suspends the main bully and another kid comes with this great idea to let her boyfriend take poor little Carrie out for Prom Night.

Seriously… Nothing spooky or scary happens throughout this entire part of the movie. The only action we get to see is when Carrie tells her mom about her period and mom goes psycho and throws the kid into a closet. That’s not scary though, it’s just sad… *yawn* Oh, and Carrie discovers she has telekinetic abilities. Not scary either.

Then in like, the last 20 minutes of the movie things finally become entertaining.  Carrie is at the prom with her date. The kid who got suspended takes revenge on Carrie by dumping a bucket of pigs blood over her. Carrie’s date dies. Carrie goes psychotic and uses her powers to kill all the kids. It was fun to watch Carrie take revenge on the kids who laughed at her. There were some interesting special effects there. Eventually she kills almost everyone. Including her mother and herself.

Gosh… This movie sucked so much ass! I was completely annoyed by the main actress who starred as Carrie. The poor girl only has ONE or TWO very awkward expressions upon her face during the entire movie. Every single scene it is the same annoying expression, whether she gets her first period in the showers or discovers that she has magical telekinetic powers and even when she goes on a killing spree: She either looks like she is about to orgasm or taking a dump! WTF is up with that man?

My conclusion about Carrie 2013: It is boring and a waste of your time.