Tired of paying taxes and bills? How about becoming a ghost citizen! It’s quite easy to become a ghost citizen in The Netherlands.It only takes you about two steps:

Make a trip to city hall to inform the local government that you have moved. You don’t have to move to the new address, physically. But, you do have to make sure that your new location is not documented by the government, in other words; Don’t inform them about your actual new location. Make sure your friends and relatives keep their mouth shut about your location also. In the meantime, you can stop paying your taxes and other unwanted bills.

Tax collectors, debt collectors and so on will try to send letters to the only address they have of you. At one point they will even send out a Huissier de justice, who will visit your only known address.

It takes about 6 months in total for them to realize you are no longer there. Then, they will ask your friends and relatives if they know about your whereabouts. At one point they will have no choice but to put “adress unknown” in your Civil registry.

Congrats! You are now a ghost.

Becoming a ghost citizen in The Netherlands has its pros and cons.

Beware, I will start to ramble incoherently from here.

There are over 400.000 ghost citizens “registered” in The Netherlands today. And I’m not kidding, it is not a joke! I’m dead serious…

There are people out there who think it is funny; a ghost citizenship. They don’t understand how someone can end up with that status. Because it’s everyone’s own personal responsiblity to make sure their civil registry is up-to-date. It’s everyone’s own responsibility to pay their bills and taxes and when they don’t; they will have to suffer for their own stupid mistakes. Then again; why pay bills and taxes when you can’t even afford a piece of bread?

Some ghost citizens are actually homeless. Maybe they suffer from mental conditions that makes it harder for them to function like “normal tax paying citizens” do. They are people like you and I, with an ongoing case of the bad luck blues. People, who have lost everything; their job, their house, their spouse and maybe even their mental sanity and have tried requesting help without succes and therefore enroll the ghost citizenship.

Some aren’t really homeless but still have the same bad-luck blues going for them. They are people, like you and I; who can’t find a steady job due to the recession and are therefor unable to pay their bills and taxes.  The bills are piling up and debth collectors knock on their doors. They attempt requesting for support by the government, they request help from social workers and turn to all sorts of help projects without success.

What is there left to do? What options are there left? Once the Huissier de justice has found their way to a debtor’s house, there is no mercy. The Huissier de justice main goal is to make sure that the debts are paid. Which is understandable, of course. But these guys are just ruthless, they are heartless fellows without compassion; for they will even take the stuffed animals and toys of innocent children in order to “pay that debt”.

And so, a lot of people with debts become ghost citizens, simply because they don’t know what other options there are left. Simply, because it is getting harder and harder to find the right help to solve the problem. On the one hand the government claims they are going to hunt down every single Dutch ghost citizen while on the other hand the local governments and city halls are making it quite difficult for a ghost citizen to turn themselves in. Because when a ghost citizen decides to turn themselves in and clean ship, the status “unknown” cannot simply be “erased”…

I’m sure this shit made NO sense to anyone, unless you know what it is like to be considered illegal immigrants in the country you were BORN and RAISED in for decades… While having a PASSPORT from that same country yet being DENIED citizenship. The system SUCKS!!

This ghost right here is fed up with the system. This ghost is growing tired of the government making it more and more difficult for us ghost citizens to try to make it right. 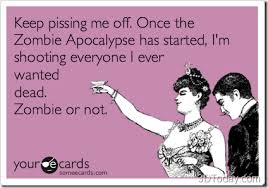 I AM SO PISSED OFF RIGHT NOW! YOU KNOW WHAT, YOU LAME ASS DUTCH GOVERNMENT?! HOW ABOUT IF THIS GHOST WILL JUST START SENDING SHIT WRAPPED UP WITH A GOLDEN RIBBON, HUH?!  AND THEN PUT “RETURN ADRESS UNKNOWN” ON IT, CAUSE  YOU DON’T KNOW WHERE I AM ANYWAY AND YOU NEVER WILL!!!!

I am seriously considering on taking a hammer and waving it around in city hall. But I won’t, I will just behead some more Deathclaws in Fallout 3 instead….

One thought on “How to become a ghost”