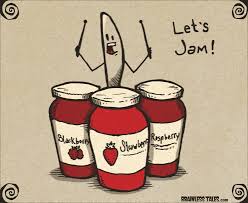 So. I went to the L5 Records Jam Session. It was lots of fun. Much has improved since the last time I’ve attended a Jam Session there. There was a good vibe and there were lots of good musicians who could each take their turn to play. Singers and rappers tend to be a bit shy, though, for some reason. But after some beers there were a few brave vocalists who dared to pick up the mic. And they all sounded pretty good.

It was such a fun night and it was nice seeing old friends and chatting up with them again after such a while. Aside from the regular house band and the random musicians to jam along with one another, playing anything from Shaka Khan’s Ain’t Nobody to Bob Marley tunes, there was also this band called Greyhound Bastards. The guys took the stage for about 20 minutes or so. They were awesome! The singer is quite impressive and the band in total sure sound like they practise with one another a lot, quite in sync with each other. I loved it and couldn’t stop banging my head to it! It was quite refreshing to hear something raw after all the r&b and tropical tunes. Check out their facebook page for more info.

Afterwards one of the guys from L5 Records announced he’d like to make a Harlem Shake clip with all the party freaks. Sure was fun to do; everyone dressed up in weird outfits and going buck wild on the Harlem Shake tune. Yes, splendidly mad fun it was XD I’m quite curious how that turned out 😛

Ah man, my neck hurts! It’s all stiff and sore… I guess I went a bit overboard with the head banging. I already smeared some Tiger Balm on it, to keep it warm. Better have myself a hot shower. I have to get ready anyways, cause I am supposed to meet up with some friends in an hour or so.

And Queen Mashimaro and Queen Droppie still need to be fed. Can’t keep them waiting… So, I better get going. Sure hope my neck will feel better asap.