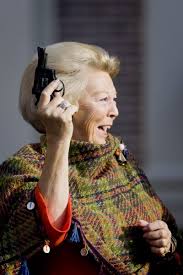 Oh well, she will officially pass the crown to her son on the 20th of April. So until then to me  Beatrix is still the Queen and for many other Dutchies too.

I’m not much of a fan of the whole “monarch system” but Beatrix has this gracefulness about her. She’s more like a national  grandmother for us Dutchies, really.

Today it is the 31st of January and it is the Dutch Queen’s Birthday. She turns 75 years old on this surprisingly sunny day and despite of her other son, Prince Friso, being in a coma and her other struggles, I do hope the Queen has a lovely day with the royal family and their servants.