Yesterday I tried going to work again after being sick at home for more than a week. Staying at home isn’t all that fun. Spend my workday coughing and scaring away customers.

To top it off, the doors of my workplace are broken. We are supposed to wear a suit for during the job and nothing else. So a coat is not allowed, even if it means risking getting sick or catching a cold with all the wind blowing in because of the broken doors. At one point I was coughing so bad, coworkers started asking me whether I shouldn’t just go home. But, I decided to just stick around until the end of my shift, despite how bad I was feeling.

Well… By the time my shift ended, I looked like a character from The Walking Dead. When I stepped into the bus, an older lady actually wanted to get up to so I could take her seat. Other people looked rather worried, children seemed a little scared. Apparently I looked that bad… The moment I got home I just felt so awful that I went straight to bed.

This morning I woke up in cold sweat, my head feeling like I had been headbanging against the wall. Couldn’t sleep at all because I have been coughing most of the night, my head hurts, every muscle of my body hurts and my sense of smell and taste is anything but optimal. I was scheduled in for the evening shift but I was in no condition to stand in that cold building again with the doors wide open. And thus called in sick from work again.

The lady from HR was a rather weird about it. “You seemed perfectly fine yesterday, can’t you just pop in a painkiller and come to work anyway?” she insisted. I was like, wtf, I don’t call in sick for fun. I call in sick because I actually feel sick. The HR lady herself was going to work from home today anyway, because she herself wasn’t feeling well either. WTF is it her business then to judge me for calling in sick when she herself is also sick at home? 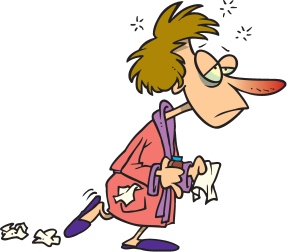 I figured to call her boss, also a woman. My boss is usually a rather cold person, but she was very friendly and understanding. “It sounds like you got a bad case of the flu, better sick-it-out and have some rest.” Was her advice.

And that is just what I did. I’ve been spending another day with mostly sleeping. Then I woke up with this pain in my tooth. All these little pains heaping up is just so not a treat to me man. Meh. I hope it’ll all be over soon.