I have a serious sleeping disorder, always have. As a child growing up I remember how I had seen many sunrises due to the fact that I had been awake ALL night… And as I grew older it didn’t really get any better.

Of course I’ve seen doctors about my weird sleep pattern. Some advised me to just write in a journal until the sleep would kick in. And that trick kind of works. But not always… Then there was the advise to use sleeping pills for a while. To be honest, I don’t really believe in sleeping pills… Well, it’s not that those pills don’t work; for there are some very good ones out there. It’s just frustrating to think I need a pill to fall asleep.

This week was yet another one of those wonderful trips through insomnia lane. I have been awake since Tuesday, and it’s Thursday already; that’s 3 days. I’m serious.

This time I had an extra stimulation to stay awake, though. It wasn’t a regular insomnia attack like I’ve been used to. This time I was kept awake also due to this excruciating pain in my jaw.

Don’t laugh, but I shit bricks for the dentist and have to confess that I haven’t been to a dentist in a long while. It’s due to ghost stuff… (Which I’ve vaguely mentioned in this blog earlier somewhere.) And it’s due to the fact that I shit bricks for the dentist. I know it’s silly and I don’t get it either why I don’t dare to go. It’s not like I ever had a bad experience with a dentist. But maybe that’s because I’ve never really had any dental problems… Till now.

But the pain is killing me! I’l just have to step over that dentist fear and meet up with the man tomorrow. Cause it sure don’t feel no good, I tell ya. It’s like someone stuck a knife in my lower jaw or something. Talking hurts like hell and I apparently have an accent now, too. 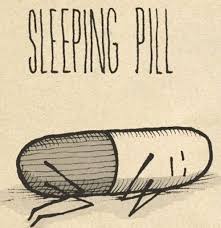 In the meantime I do need to try to get some sleep. My sister was so sweet to get me some sleeping pills…. And yes, I’ve said that I don’t like those things but facing the dentist while not having slept for at least 3 days doesn’t sound like a good idea either.

So now I’ve stuffed myself with pain killers and sleeping pills. The prescription claims the pills should work within an hour…. I’ve been typing away for 10 minutes already and sure hope they work.  And otherwise I’ll just be bombing this blog account with some more random insomnia inspired outbursts…

In other news… Last night my mom (who is retired, doesn’t know how to use Facebook and is going 65 this year) came up with this MEME:

6 thoughts on “Took a sleeping pill….”