Yesterday was a full day with birthdays again. I first had my mom’s birthday, she’s officially retired now and so we went to celebrate this with just our small family at a Chinese restaurant. A real Chinese restaurant, not the kind that is influenced by the Western cuisine. We went early in the afternoon, so that we could try out the lunch menu. Which meant a lot of great dim sum dishes and some really lovely Chinese tea. Ooooh, those dim sum dishes are just to die for!

To surprise my mom, I wanted to rearrange a few things in the house for her. I managed to fix my mom’s sowing room too. She used to just tow her sowing machine around the house. Now she has one room with enough space for her to sow clotthes and such. She was really thrilled about it. Aside from that, I also gave her a bottle of Estee Lauder perfume, her favorite. I love to spoil my mom 🙂 I’ll be sure to spoil her some more today, cause the weekend isn’t over and her official birthday is actually today. But today is church day and so she’s off to church right now. But there’s more surprises waiting for her when she gets home XD 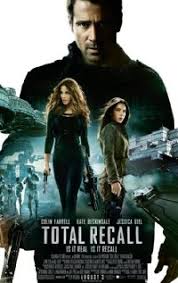 Aside from my mom’s birthday, I also had a birthday of a friend of mine. She wanted to go to the movies Saturday night. The first plan was to go and see The Expendables 2 with Sylvester Stallone and Arnold Schwarzenegger. But somehow we didn’t have a good feeling about the movie, so we decided to try out Total Recall instead; the remake of the movie Arnold Schwarzeneger starred in, in 1990 directed by none other than Paul Verhoeven (Dutch pride here, sorry).

I’ll try not to spoil the movie for those who haven’t seen it yet. It is, in my opinion, a decent movie to watch. I think it we made a good choice to watch this, instead of The Expendables 2. The 2012 version of Total Recall is indeed an action packed film with lots of energy and an interesting futuristic landscape. The landscape just sucks you up, really. The robots, the cities build on top of cities, elevators that bring you to the other side of the world, the refrigerators that look like giant iPad’s and so on… Have I managed to mention how much I love futuristic SF movies? I guess now I have, if I haven’t mentioned it before..

The movie moves really fast. It’s not the kind of movie where you can easily run to the toilet, because when you get back you might have missed a lot. My friend experienced that yesterday when she rushed to the toilet; She left at the moment when Douglas Quaid was running away for his “wife” and when she came back, Douglas Quaid turned out to be a double agent.

I just love the mind fucking in this movie.  The whole “your life is a lie and you are not who you thought you were” thing is just wonderful. They toy with your mind a lot throughout the movie, questioning the identity of the main character a few times… I’ve loved it in the 1990 version. I still like it in the 2012 version. The story is just WAHOO; fucking awesome XD

But somehow, I kind of missed Arnold Schwarzenegger throughout the entire movie. I have nothing against Colin Farrell… He did pull off an ok double agent throughout the movie. And, he’s not bad to look at. Very interesting specimen to look at, in fact.

What I also missed throughout the entire movie… Was the Red Planet (Mars) where Arnold Schwarzenegger originally had to go to in the 1990 version. Cause he, Arnold, went to MARS once he discovered his true identity. Colin Farrell went to the The United Federation of Britain? There were no mutants either! What the fuck is up with that?

So… I guess if you’ve never seen the 1990 version, Total Recall 2012 is alright. My friend never saw the original and she said she was entertained throughout the movie. There’s a lot of action, there are fights between Colin Farrell and his “wife” (brilliant scene btw, I really loved that part; she really beat the crap out of him, until he got away). The ending was a little soft though. Cause he eventually kills her… We were really wanting a bitch fight, and yes with Colin Farrell it kind of looked like a bitch fight but… Go see the movie; you’ll see what I mean.

And after you’ve seen the 2012 version, go and get yourself the original version and see how far ahead Paul Verhoeven and Arnold Schwarzenegger were in the fucking 1990’s compared to the 2012 remake! Cause, like I said, nobody can top big old Arnie!

One thought on “More birthdays and Total Recall 2012”